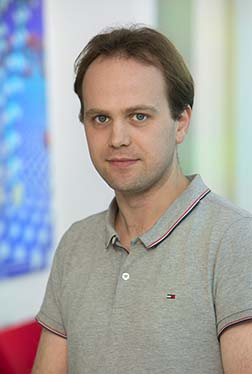 “He received his masters of optical engineering and science and technology as a double degree from Institut d’Optique Paris and ESPCI Paris in 2011. Then, he studied for a PhD at Institut Langevin (Université Pierre et Marie Curie & ESPCI Paris) that he completed in 2015. During his PhD he studied dynamic holography in laser media in order to detect acousto-optic and photoacoustic signals for imaging of biological media.
After his PhD, Baptiste moved to the University of Nottingham (UK) to work as a research fellow in the Optics and Photonics Research Group. His project was to investigate the use of ultrasound as a guide for tomographic reconstruction of bioluminescence imaging.
He now works for the Biophotonics group at Tyndall National Institute. His work involves the use of advanced wave-front shaping techniques and light filtering using slow-light effects to detect acousto-optical signals deep in biological tissue.”